10 Unique Elevators of the World

10 Unique Elevators of the World

You may think of an elevator as just something to get you from point A to point B – not especially exciting. And while elevators provide a simple service, that doesn’t mean they can’t also be beautiful and exceptionally creative. Case in point – we give you 10 of the most unique elevators of the world!

The AquaDom is an 82ft tall cylindrical acrylic glass aquarium with a transparent elevator running through its center. This beautifully designed elevator, located at the Radisson Blu Hotel in Berlin, opened in 2004 and cost about $12.8 million euros (almost $14 million dollars) to build. It is the largest acrylic cylindrical aquarium in the world – about 36ft in diameter – and is filled with 260,000 gallons of water! It contains 50 species of bony fish, cartilaginous fish, and marine invertebrates. It takes 3-4 divers to clean the tank and feed the fish each day! 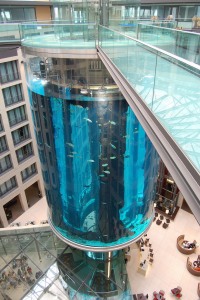 Located in Stockholm, this elevator consists of two spherical cabins traveling up the outside of the Ericsson Globe, an indoor arena and the largest hemispherical building in the world. The glass-paned, gondola-like cabins lift passengers up the south side of the building to the top of the arena, offering incredible views along the way. The cabins travel on a curved path, presenting a marked departure from the usual vertical operation of an elevator. This elevator began operating in 2010, and has become quite the draw for tourists. 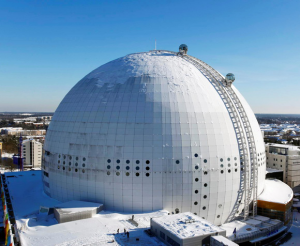 Overlooking the beautiful Lake Lucerne near the northern boundary of the Swiss Alps, the Hammetschwand Elevator is the highest exterior elevator in Europe at 502ft tall. It runs along the side of a nearly vertical cliff next to the lake, and is incredibly fast – it takes only one minute to get to the top! Built in 1905 (with multiple equipment overhauls since to keep it up to date), it was innovative for its time, and is still impressive today. 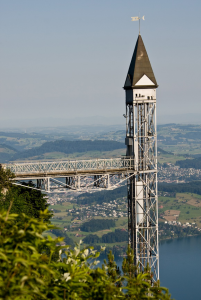 The Bailong Elevator holds the Guiness World Record for highest outdoor lift on the planet! Climbing up huge sandstone cliffs in the Zhangjiajie National Forest Park, this glass elevator ascends to a height of 1,070 feet, offering amazing views of the surrounding landscape. The elevator took 3 years to complete, opening to the public in 2002. It is speedy, taking less than 2 minutes to ride from the base to the summit. In addition to being the tallest elevator in the world, it is also one of the largest with a capacity for 50 passengers! 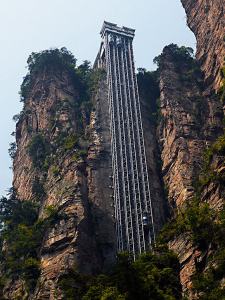 This elevator is a little closer to home, and is a must-see if you visit St. Louis, Missouri. It is located inside the Gateway Arch, the tallest arch on the planet and the tallest man-made monument in the Western Hemisphere. Opened to the public in 1967, this uniquely designed elevator consists of eight egg-shaped compartments, each containing five seats. As they rise up the incline of the arch, the compartments rotate slightly to follow the curved tracks. The compartment doors have narrow windows in them, allowing passengers to view the interior structure of the arch as they ascend. At the apex of the arch is a small observation deck with views of St. Louis. 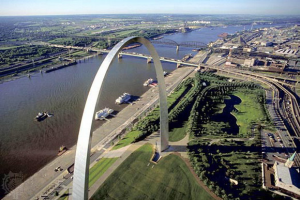 Opened to the public in 1902, this elevator is another example of early ingenuity in both mechanics and design. Located in the historical city of Lisbon, this lift climbs seven stories, connecting the lower streets of the Baixa district with the higher Largo do Carmo area. With its Neo-Gothic design and panoramic views at the top, this elevator has become a prime tourist attraction in Lisbon. 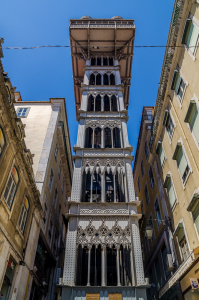 In the same way that the Santa Justa connects two levels of neighborhoods in Lisbon, the Lacerda Elevator connects the lower city and upper city of Salvador, Brazil. At a height of 235ft, this elevator offers passengers superb views of the bay coastline as they enjoy a swift 30-second trip. It’s a busy elevator, transporting around 28 thousand passengers per day! Finished in 1873, the Lacerda ran on hydraulics before switching to electricity in 1906. 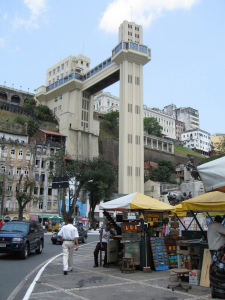 This one is technically a boat lift, not a traditional elevator, but it’s such a unique design we couldn’t resist including it. The lift consists of two opposing arms that form the shape of a Celtic-inspired double-headed axe. Built in 2002, this rotating boat lift replaced a series of locks that had fallen into disrepair, connecting two canals near the town of Falkirk for the first time since the 1930s! If you’re curious and want to see it in action, check out this YouTube video.

The Sumitomo Fudosan Roppongi Grand Tower in Tokyo plays host to the largest passenger elevators in Japan. The tower has four giant 10ftx11ft elevators that can carry a whopping 90 people at a speed of 984 feet per second! Two of these huge elevators are fronted with glass, giving passengers panoramic views of Tokyo.

Asansör, Turkish for “elevator”, is a historical building in Ízmir’s Karatas quarter in the district of Konak in Turkey. Built in 1907, this elevator carries passengers through a steep cliff between two parts of the quarter. With a viewing platform offering sweeping views of the city and one of the area’s most famous restaurants at the top, this building and its elevator play host to a steady stream of tourists each year.

Here at SCS, we find all elevators to be endlessly fascinating. Though you may not feel the same way, you have to admit these are pretty spectacular!

How It Works: Sublimation Printing

Boosting Mental Health in Your Workplace: How To Support Your Employees

This may be a good place to introduce yourself and your site or include some credits.